What I only recently learnt from my uncle has impressed me greatly. He sent me the biography of my grandfather, in which it said that one of the companies for which he worked during his journeyman years between 1890 and 1895 was NSU in Neckarhulm, Germany. Today, NSU belongs to Audi – so for me, the wheel has turned full circle. Back in Hochdorf he first opened a bicycle sales and repair workshop, in 1906 he became co-founder of Maschinenfabrik Hochdorf, and then opened a mechanical engineering workshop in Eschenbach. He was an industrial pioneer and one of the first car-drivers in the canton of Lucerne, even before there were driving licences!

My father, Josef Bachmann, also became a motor mechanic. After his journeyman years, including with Saurer at Arbon, in 1953 he opened his own garage on his parents' farm at Hauptstrasse 43 in Inwil. On 1 October 1955, the generously dimensioned new building at Hauptstrasse 2 in Inwil was put into operation. Ten years later, in 1965, the premises were extended and modernised and a metalwork and paintshop were added. In 1980, with me, Daniel Bachmann, the second generation entered the family business. I worked my apprenticeship outside my father's garage. 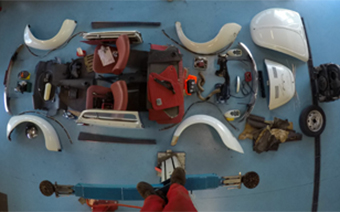 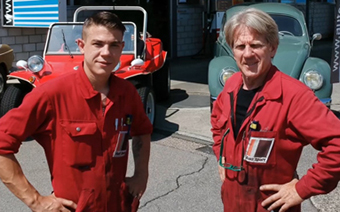 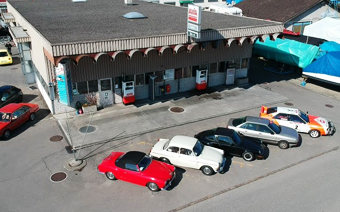 In 1989, the limited company was established and I immediately took over as its general manager. In the 1980s I also discovered my passion for the legendary VW Beetle and Audi Quattro. Equally, I became fascinated by motor racing. So much so that, besides my work in the garage, weekend after weekend I was to be found on the racing circuits in Switzerland and abroad – I began to live my fascination. On countless travels I bought everything relating to the VW Beetle and Audi Quattro. People laughed at me – it was mad to invest so much money in old cars. But now, exactly the same people knock on my door because they are searching for rare spare parts for their 'old' cars. Today, I own a real treasure trove that makes every Beetle and Quattro lover's heart leap. In addition to thousands of meticulously sorted spare parts in all shapes and sizes, the legendary oldtimer VWs and Audis are my pride and joy.

In 2005, after almost 50 years of VW and Audi, the garage business was realigned. With Bosch Car Service a new kind of partnership and collaboration began. A partner that has the technical know-how for all makes, and Autowelt Bachmann AG, a regional garage that can offer the service that is necessary for its demanding customers. Autowelt Bachmann remains the Classic Partner for all matters related to VW and Audi. Sales and purchases of used cars, as well as the import of new vehicles from the EU, complete the services available to customers.

On 1 January 2014 the logical and consistent step took place with the aim of a pleasurable and long-term direction. The long-serving employee and workshop manager Marc Gribi continues to run Bosch Car Service on his own account and Autowelt Bachmann devotes itself entirely to the special automobile culture of the Audi and VW brands.

This includes repairs and restorations, production and sale of spare parts, car sales and leasing, talks, trade fairs, demonstrations, participation at sporting events, correction of press reports, fan relations, and acting as experts for enquiries from importers and manufacturers.